My name is Shinil Vaish. I’m an IT professional, a solo traveller, an adventure seeker, a nemophilist and a wildlife-photographer.   I’m in the IT…

A Girl In Europe #Italy

“Travelling! It leaves you speechless, then turns you into a storyteller” The Travels of Ibn Battutah

Although I am not a great storyteller but what I’m good at is trying things that I’ve never tried before, so here I am trying to write my first ever travel journal of my first ever solo backpacking trip. #AGirlInEurope

It started in June 2017, when getting on with the daily routine became unbearable and I knew I had to take a rather long trip and get away with the one person I couldn’t travel without #Myself

Where should I go was the next big question. There were options abound–landscapes, mountains, historical places, beaches … I explored the shit out of Google before deciding that I wanted to experience it all -“YEH DIL MANGE MORE”.

And so, I figured, I need to visit Europe for its versatile and many different countries and cultures making it an ideal destination for a Want-it-all traveller like me. Deciding for a duration that’s not too short nor too long that I become a nomad, it was finally planned that a month long trip would be an ideal duration to visit 10 European countries.

While planning for the destination was challenging, nothing makes an Engineer more productive than the “Last minute”. I also lived up to the expectation and boarded for my #Solo #Backpacking trip.

And finally, I reached Rome. It was not a known territory for me, although I tried to gather as much information from our much known friend Google but reading about it and living it is a complete different story.

When I reached hotel, it was already 5pm. Without wasting much time, I headed towards the Trevi Fountain, a true jewel of water and stone. The fountain looks glorious in the nightlights. As per the tradition regarding Trevi Fountain if you throw a coin into the water you will sure return to Rome. I also tried my luck but my reasons were different. I asked that my trip should be fun, adventurous with lot of beautiful memories and experiences and last but not the least Goddess Trivia to protect me.

And my prayers were answered immediately, while going back to my hotel at 10pm, I figured out the metro station from where I had to board the train was closed. It was dark. I was a little anxious and nervous now but was consoling myself, ‘It’s a part of adventure’. There was no one on that street to guide me but help came from a not so familiar friend ‘Google MAPS’. I have not tried this in India but in Europe it worked well. It showed me all the alternate ways to get to my hotel and I followed it like an obedient child and boarded a bus without the ticket. I guess it was the spell that protected me from the ticket collector.

Next day in Rome, I went to see the Vatican City where Holy Pope missed the privilege to meet me 🙂 clicked lot of pictures and explored the city on foot using google maps. I could feel the effect of sun rays had on my skin in the selfies and my body was demanding for some European style treatment now, so I bought a fashionable hat for myself. Next I went to Roman forum and Colosseum a must-see attraction in Rome.

Colosseum located just east of the Roman forum is the largest amphitheater ever built and is one of the architectural wonders of the middle ages. There was a big queue at the entry gate but I was lucky enough to get through as my entry tickets were pre-booked. It was a sight to behold. It reminded me of the arena in old movies where the Emperor and his people used to sit and enjoy the fights between the slaves and the lions, and no one can escape out from this chamber of death.

The Roman forum is a place where old buildings fall into rack & ruin. It is surrounded by Palatine and Capitoline Hills. Although it was a hot sunny day but the clusters of the archaeological wreck inspired me to climb to the top of the hill just to capture the bird view in my eyes and camera. I was feeling hungry but there were no restaurants on the top so I took out fruits from my bag and relished them with cold water from a small fountain on the top of the hill.

Not to mention I am not good in taking pictures but during this trip I learnt this art too.

I visited St. Peter’s Basilica Church, Pantheon a former Roman temple and few other places. Late evening I headed towards the Piazza Navona, one of the most famous squares in the world with lots of cafes and restaurants. It seems like a carnival where the artists and buskers added the vibrant colors to the atmosphere by their mesmerizing performances. A cup of Cappuccino with some butter cookies recharged my energy level and I spent few hours enjoying the place.

Next day I boarded a bus for Pisa to see another Wonder of the Medieval Mind “The Leaning Tower of Pisa”. I dumped my luggage in a cloak room just in front of the tower. Although it was quite expensive but I was left with no choice. While walking towards the tower, I overheard a guide telling the story behind the leaning tower. He told while constructing the bell tower, architects did not lay a deep foundation and the soil of the area was not strong enough to hold the weight of the tower. The construction was halted for approximately 100 years until the soil settled and the bell tower got its permanent leaned shape. It was a mistake that turned out very well. Everyone was busy bluffing the camera to hold up the leaning tower and so did I. The name inspired my phone so much that it completely leaned out of the selfie stick and the screen broke.

I was so lost in the tower that I didn’t even realized missing the lunch time. It was around 4:30pm, none of the restaurants were serving food. But I was hungry, so I again took help of my friend Google to show me all options for Indian food. I went to the Rajasthan restaurant where I was welcomed by an Italian lady who told me we are not serving food now but you can buy some soft drinks. I requested her for an undue favor, but she was kind enough to ask his cook Mr. Thapa to prepare some delicious food and saved me from starving to death.

I thanked both, for their kind gesture to which she replied, ‘We are proud of Girls like you who are brave enough to travel alone.’ These encouraging words boosted my confidence and I again started to explore the city with bags on my shoulders and finally boarded the train to Milan the fashion city.

Milan is a little different from other places, it’s a city both rich in fashion and history and is a home to some of the popular fashion brands.

What you will miss in this city is the warmth. There are so many snatchers in this city and they will always try to snatch away your things. I also faced a similar situation but was lucky enough to save my stuff from the snatcher. Beside this my experience was good and this was the first time I had an Italian Pizza in Italy, it was heavenly and delicious. It had a thin crust and was topped with rich tomatoes, mushrooms and fresh herbs infused with olive oil. ‘Mamamia’ just thinking about it made my mouth water.

My final destination in Italy was Venice-the city of canals. I was a little surprised, as I had never seen any city without roads before this. Like we have cabs on road they have Vaporetto (boats) for water transportation. I reached Venice late night and just outside the railway station there was water. I set the hotel location in my Google MAPS and after walking a little towards left climbed the bridge over the canal as my hotel was situated on the other side. While having my breakfast, I was scratching my head to understand the layout of the city from the map, the manager handed me last night.

In the map the city was divided in two parts by the Great Grand canal. These two sides of the city were further divided in small islands by multiple canals. There were hotels, markets and other monuments on both side of the Great Grand Canal. During daytime, I treated myself with mixed fruits and different flavors of famous Gelato. All flavors were amazing, but my favorite was the Berries. After visiting the famous monuments, the oldest Rialto bridge and the markets, I took a full day pass and enjoyed the boat rides to different islands.

I enjoyed luscious Italian pizza with a glass of red wine in a canal side restaurant, feeling the cool breeze from the water that took away all the thoughts in my mind and just left ‘Me’ there to enjoy the scenic beauty.

Although all these places were well captured in my eyes but as a remembrance, I collected souvenirs from all the places.

Next day early morning I waved and said, “Ciao Italy”, I felt it also waved back and said, “See you soon Girl”!

The trip gave a new horizon to the newbie in the town. I not only explored and learned about new places and people but also a lot about myself. It gave me wings to live my unlived dreams. I tick off the first country in my list and boarded the Euro rail to my next destination Switzerland “The Land of Alps”… 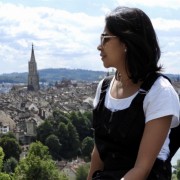 17 thoughts on “A Girl In Europe #Italy”